Please note that the population clock above does not reflect actual migration situation due to movement restrictions.

Quick facts about the population of China

The data is given as of 1st of January of an year.

During 2021 China population is projected to increase by 7,450,945 people and reach 1,451,432,510 in the beginning of 2022. The natural increase is expected to be positive, as the number of births will exceed the number of deaths by 7,840,820. If external migration will remain on the previous year level, the population will be declined by 389,875 due to the migration reasons. It means that the number of people who leave China to settle permanently in another country (emigrants) will prevail over the number of people who move into the country (to which they are not native) in order to settle there as permanent residents (immigrants).

According to our estimations, daily change rates of China population in 2021 will be the following:

Below are the key figures for China population in 2020:

China population density is 150.4 people per square kilometer (389.6/mi2) as of May 2021. Density of population is calculated as permanently settled population of China divided by total area of the country. Total area is the sum of land and water areas within international boundaries and coastlines of China. The total area of China is 9,598,089 km2 (3,705,843 mi2) according to the United Nations Statistics Division 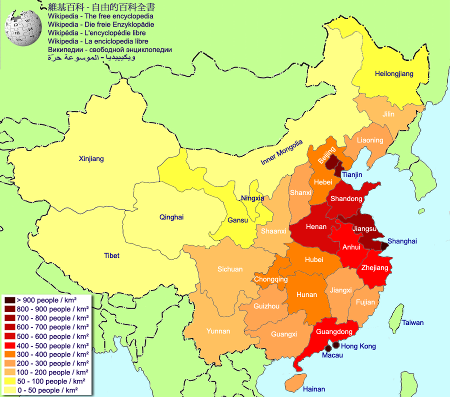 Religions and beliefs in China

More than a half (52.2%) of the population in China do not identify themselves with any particular religion. China is the most concentrated place of religiously unaffiliated in the world - about 62% of world unaffiliated population. Another 21.9% are followers of the Chinese folk religion or Chinese popular religion, which includes Confucianism and Taoism (Daoism). About 18.2% are Buddhists, 5.1% are Christians, 1.8% are Muslims and 0.7% adhere to other religious organisations.

Source: Pew Research Center. The Global Religious Landscape: A Report on the Size and Distribution of the World’s Major Religious Groups as of 2010

Number of followers estimated by Countrymeters 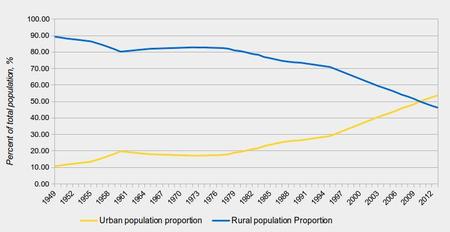 As of the beginning of 2021 according to our estimates China had the following population age distribution:

We prepared a simplified model of the population distribution pyramid which is broken down into 3 main age groups. The groups are the same as we used above: population under 15, between 15 and 64 and population which is over 65 year old.

Note: The pyramid provided is not corresponding to data given above because the age groups have different number of years.

As we can see the China population pyramid has a contracting type. This type of pyramid is more common for highly developed countries with low birth and death rates. Usually countries with such kind of population age distribution model have long life expectancy, high level of education and good health care.

Source: The estimation data for section "China age structure" is based on the latest demographic and social statistics by United Nations Statistics Division

This ratio shows the pressure on productive population produced by the dependent part of population.

The total dependency ratio of population in China is 35.9 %.

Child dependency ratio is a ratio of people below working age (under 15) to workforce of a country.

Aged dependency ratio is a ratio of people above working age (65+) to workforce of a country.

Aged dependency ratio in China is 12 %.

Source: The estimation data for section "China age dependency ratio" is based on the latest demographic and social statistics by United Nations Statistics Division

Life expectancy at birth is one of the most important demographic indicator. It shows the number of years a newborn infant would live assuming that birth and death rates will remain at the same level during the whole lifetime.

Total life expectancy (both sexes) at birth for China is 74.7 years.
This is above the average life expectancy at birth of the global population which is about 71 years (according to Population Division of the Department of Economic and Social Affairs of the United Nations).

Source: The estimation data for section "China population literacy" is based on the latest data published by UNESCO Institute for Statistics (retrieved March 13, 2016)

The data is given as of 1st of January of an year.

The data is given as of 1st of July of an year (medium fertility variant).